Let's make learning Burmese language fun and interesting. In this lesson, I will describe physical body parts in Myanmar, and what to do with them. For example, when I think of "hand", the old Beatles song "I wanna hold your hand" came up to my mind. How would you say that phrase in Burmese?

I will cover the common Myanmar Language usages associated with each body part, as well as illnesses and medical terms to be used when you see a doctor. Let's start systematically from the top down.

Burmese word for head is goun3.

That's the advice to think over something with cool head. Here's the break-down.

ay3-ay3 — coolly. Note: when you double up the word ay3 which means "cool", the word becomes an adverb "coolly".


Myanmar Grammar Notes: words such as goun3 kite and goun3 mu3 are verbs. They are compound words with the noun goun3 meaning head.

I need a hair cut

I'll give you a slap.


In one website, a Canadian woman who travels extensively in Myanmar (without any companion or guide) had learned to say a phrase quite similar to this. She mentioned that if local punks harass her by saying "pretty lady, pretty lady", that phrase will come in handy.


myet-hna2 ngeare2 deare2 — "feel small" is the feeling you have when other people look down on you, have low opinion of you, and or make disparaging remarks about you, your family or your country. The truth could be real or imagined.

byi2 — has reached a certain state or condition.


A-theare3 kweare3 ba2 byi2 — My heart is broken! ( Note: not a medical term. Doctors cannot cure this. I hereby declare that there are no broken-hearted people in Myanmar— only those with broken liver.)

The video clip below describes how Myanmar girls are afraid of broken liver.

Myanmar Grammar Notes: This is just like in English where heart as a noun can be used as broken-hearted as a verb.

I have a chest pain. (Medical term.)

hna1-lone3 dtha3 — heart that feels. This is a modern Burmese word which gets the idea of Heart from English. I have covered in that Burmese song not to break the hna1-lone3 dtha3.

Both active and passive smoking can cause

If your diet is high in cholesterol, trans fat and saturated fats, and if you don't exercise regularly, you may want to check whether you have

shi1 deare2 — I have (present + affirmation)

If your illness is long-term and chronic, use the words

Some other illnesses under this include:


The full term for Acquired Immune Deficiency Syndrome (AIDS) is:


HIV/AIDS is recognized by the Ministry of Health as a major social and health issue. The highest infection rates are in those regions bordering Thailand and China. According to WHO report , in 2010 HIV/AIDS was responsible for 1% of cause of deaths in children under 5 (which could be the result of mother-to-child infection).

In addition to long-term chronic illnesses, the words

shi1 deare2 can also be used to say if you or someone is pregnant:

for short-term symptoms like flu, fever, cough, cold, vomit, running nose, swollen glands, and so on.

Use the word youn2 if something is swollen. It's the same word and spelling for "color". For example,

My knees are swollen. (knee + swollen + "as of current" + affirmation)

My joints are swollen. (joint + swollen + "as of current" + affirmation)


A-hsit is a singular form of a muscle joint. If you want to stress that several joints are swollen, you can use the plural word a-hsit dway2.

The complete word for stomach in written Burmese is woon3 bite. In spoken language, this word is shortened as bite.

I have a diarrhoea.

Use this phrase if you have a bloated feeling in the stomach due to indigestion.

Burmese word let is the general term for the whole hand from the shoulder to the finger tip. If you want to be more specific,

Here is an advice on not to use your index finger on other people:

Don't put your blame on other people by pointing finger at them.

Age old wisdom says if you point one finger at others, three fingers are pointing back at you. (except for the thumb, I guess.)

How would you say, "I want to hold your hand"? The phrase doesn't sound natural in Burmese unless you hold hands (with your girlfriend, for example) and walk together instead of just sit there.

pyi3 — after that (conjunction to connect two verbs)

We will hold hands and walk.


Modify that phrase a bit, and it becomes a good one for politicians asking people to join hands with them.

I have a back pain.

It's interesting that kha3 refers to the waist, but that phrase can be used for the muscle sore from the waist up instead of the word for the "back", which is kjau3.

You can use the word chay2-dout for your leg from toe to thigh.

My legs are tired! 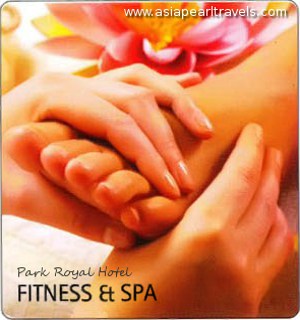 As for me, my hands are getting tired. So, my last phrase for this lesson is,


Yes, I am very, very tired. I am going to forget about my endless long days and exhausting late nights for a while. Hope you heart is lightened and refreshed by this video clip as it did to me.

Relax for a moment

Yes, I am very, very tired. I am going to forget about my endless long days and exhausting late nights for a while. Hope you heart is lightened and refreshed by this video clip as it did to me. [1 minute 10 seconds]

Read this page with Myanmar Script